San Francisco to Require Disclosures From Homeowners On Flood-Prone Areas

Some San Francisco homeowners will unfortunately soon have to add one more thing on their to-do list upon selling their properties – they would need to inform prospective buyers whether their property is in a flood-prone area, or otherwise.

In the coming months, the San Francisco Public Utilities Commission hopes to get the Board of Supervisors to introduce and pass an ordinance that would require property owners to notify prospective buyers when the building for sale lies in a flood-prone part of the city. 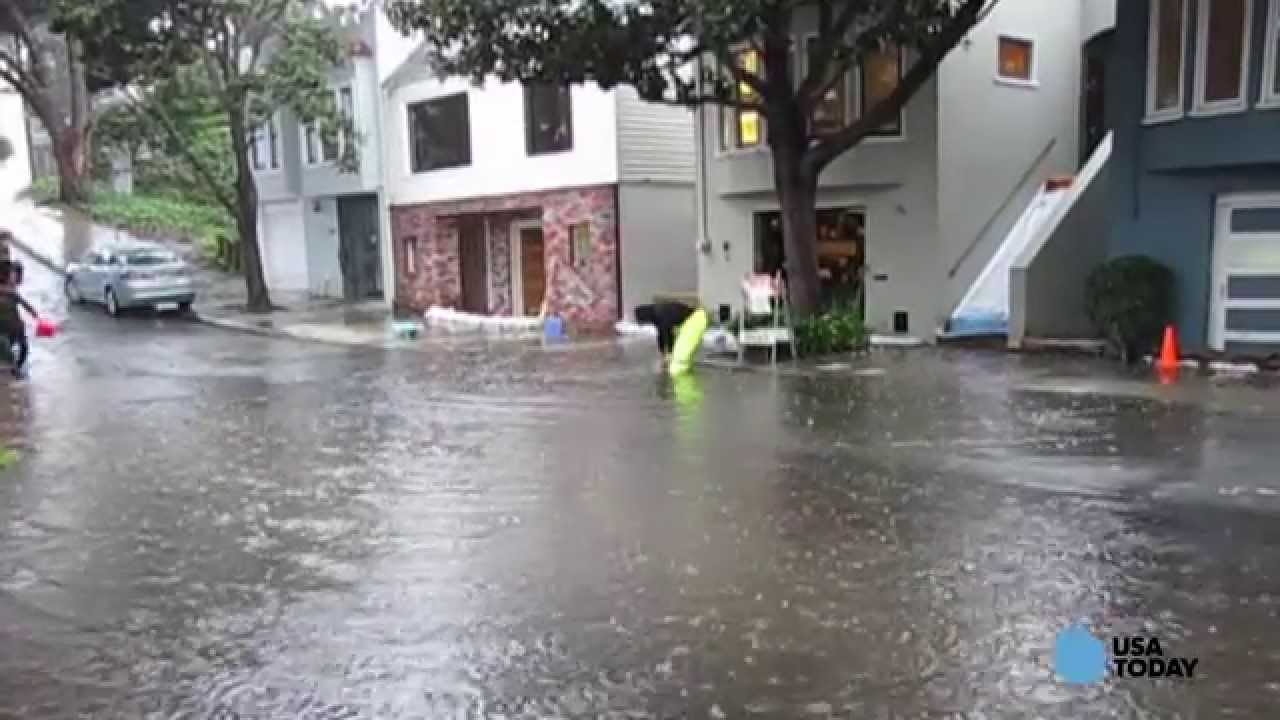 San Francisco’s Building Inspection Commission unanimously voted on this ordinance last week, clearing the way for the Board of Supervisors to take it up from there.

And, for the first time in city history, the neighborhoods most at-risk for flooding from too much rainfall have been identified. Last year, the SFPUC completed a mapping project showing roughly 2,000 parcels that are likely to experience serious flooding during a 100-year storm — one that brings enough rainfall to drench more than half a city block with at least six inches of water.

If you want a hard copy of the Flood Map, visit: sfwater.org or click here.

If the proposed ordinance moves ahead, San Francisco property owners would have to reference the map to find out if their parcel is in a flood-prone area, and if so, they would have to add a disclosure to potential buyers. 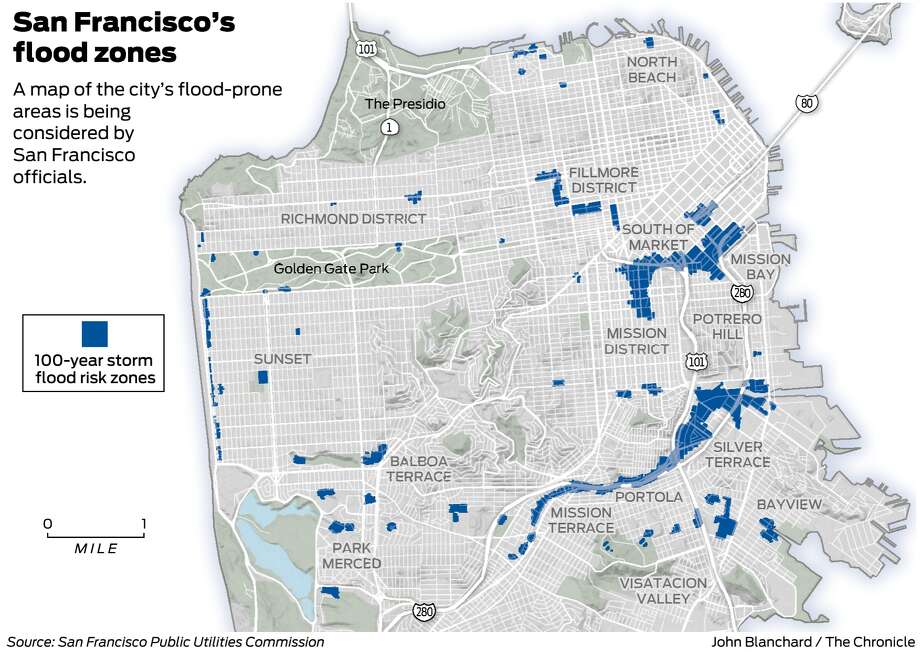 The map will most likely affect property values and flood insurance rates. But SFPUC officials see it as a means to be transparent to buyers when properties are changing owners. It also goes along with some of the broader efforts the agency is currently working on – including major infrastructure improvements to make the city more resilient to the beatings of climate change, which latter is expected to bring even heavier rainstorms to San Francisco.

Statistically, there is supposed to be a 1 percent chance of a 100-year storm happening in any given year, per SF Gate. But San Francisco has experienced two such storms since 2000. Predictably, the most flood-prone areas are those in low-lying areas and those that were built on top of bodies of water, like the Islais Creek on Mission Bay.

Sarah Minick, a utility planning division manager with the SFPUC’s wastewater division, said that the agency “takes seriously” the prospect that the map could affect property values.

“We understand it can be concerning to people. However, we feel that the public policy initiative of making people more flood-resilient is important and that, because we do have this information, to be able to provide it to the public, it seems absolutely a good-government move to do so.”

Real estate agents and brokers, who are expecting the ordinance to pass, say they’ve already been brokering sales with disclosures based on the flood map.

“Every buyer has to judge this for themselves — is (the flood risk) something I want to deal with or not?” said Kevin Birmingham, president of Park North Real Estate. “We haven’t seen an effect on value, but could this report change things? It could, but there’s no guarantee one way or the other.”

Through the SFPUC’s RainReadySF initiative, the city works to inform the public about the hazards of flooding while providing incentives for preventative measures, like handing out free sandbags and grants to reimburse flood victims who want to upgrade their properties to prevent future damage.

“We’re hoping awareness will also lead to actions that can help folks,” Minick told the Building Inspection Commission on Wednesday. “It can be as simple as folks saying, ‘Now that I know (about the flood risk), I’m not going to store all of this valuable electronic equipment in my garage.’”

Photo courtesy of Next Level Insurance

Last year, the SFPUC had sent out letters to about 4,000 property owners informing them that their parcels were in flood-prone areas.

But Riz Gache didn’t need a letter to inform him that he was in a flood zone. His home, like dozens of others near the border of Mission Terrace and Glen Park, has flooded multiple times in recent years — twice in one week in December 2014. The flooding ruined his basement and home office, causing tens of thousands of dollars in damage.

Gache successfully petitioned the city to pay for some of the damage. Dozens of others have sued. In a single case, one with more than 40 plaintiffs claiming the city should pay for the damage their property sustained from flooding, officials have authorized just over $1 million in settlements. Three plaintiffs are still waiting to settle their cases.

To Gache and others, the flood map and the rest of the SFPUC’s efforts to make the city more resilient to big storms is a fig leaf for the much larger — and vastly more expensive — infrastructure improvements they believe will prevent future flooding.

Such improvements would likely cost several billion dollars. He and some of his neighbors started a website called Solutions Not Sandbags, to raise awareness about their flooding problems, citywide San Francisco sewer failures, infrastructure/development issues, and to call for the City of San Francisco to fix what they see as sewer plumbing and infrastructure deficiencies. 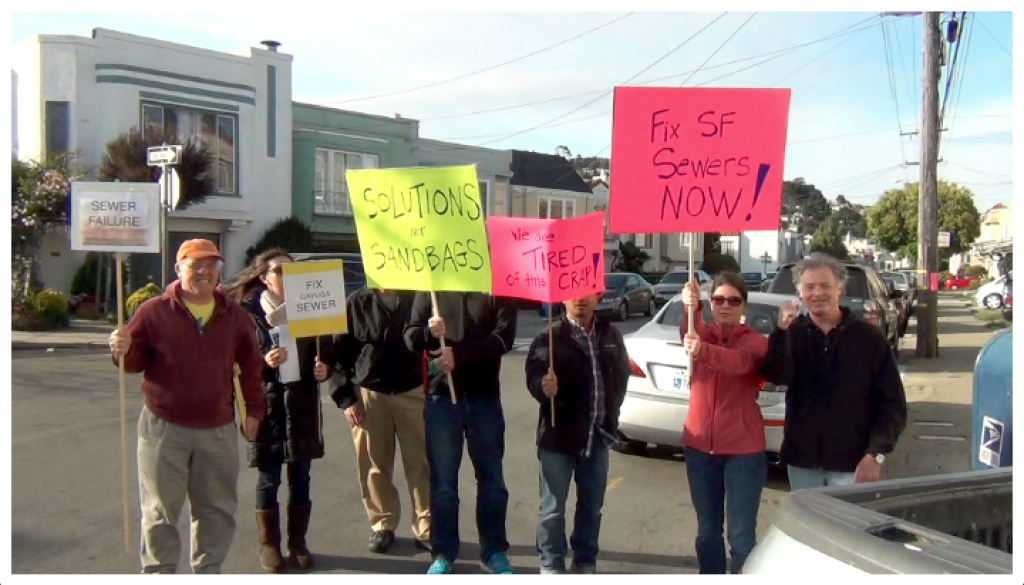 Photo courtesy of Solutions Not Sandbags

“This is not a solution,” Gache said of the flood map. “It’s a new thing where they’re saying, ‘Hey, we’ve got climate problems, we’re going to have more rain.’ It’s B.S. For us, it’s utility repair. That’s what you needed to do.”