Now that Spring is here, we can now maybe step out of the house, the office, and enjoy the city on foot. Why? It’s springtime! 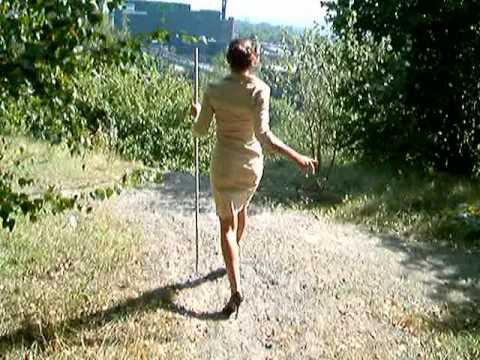 Below are more than a dozen ideal strolls for taking in the sights and sounds of San Francisco – ranging from leisurely walks to serious excursions.

This list could have included Bernal Heights Summit, Stern Grove, Angel Island but we are opting for more “leisurely walks”, not sweat-inducing hikes so they are not on this list. 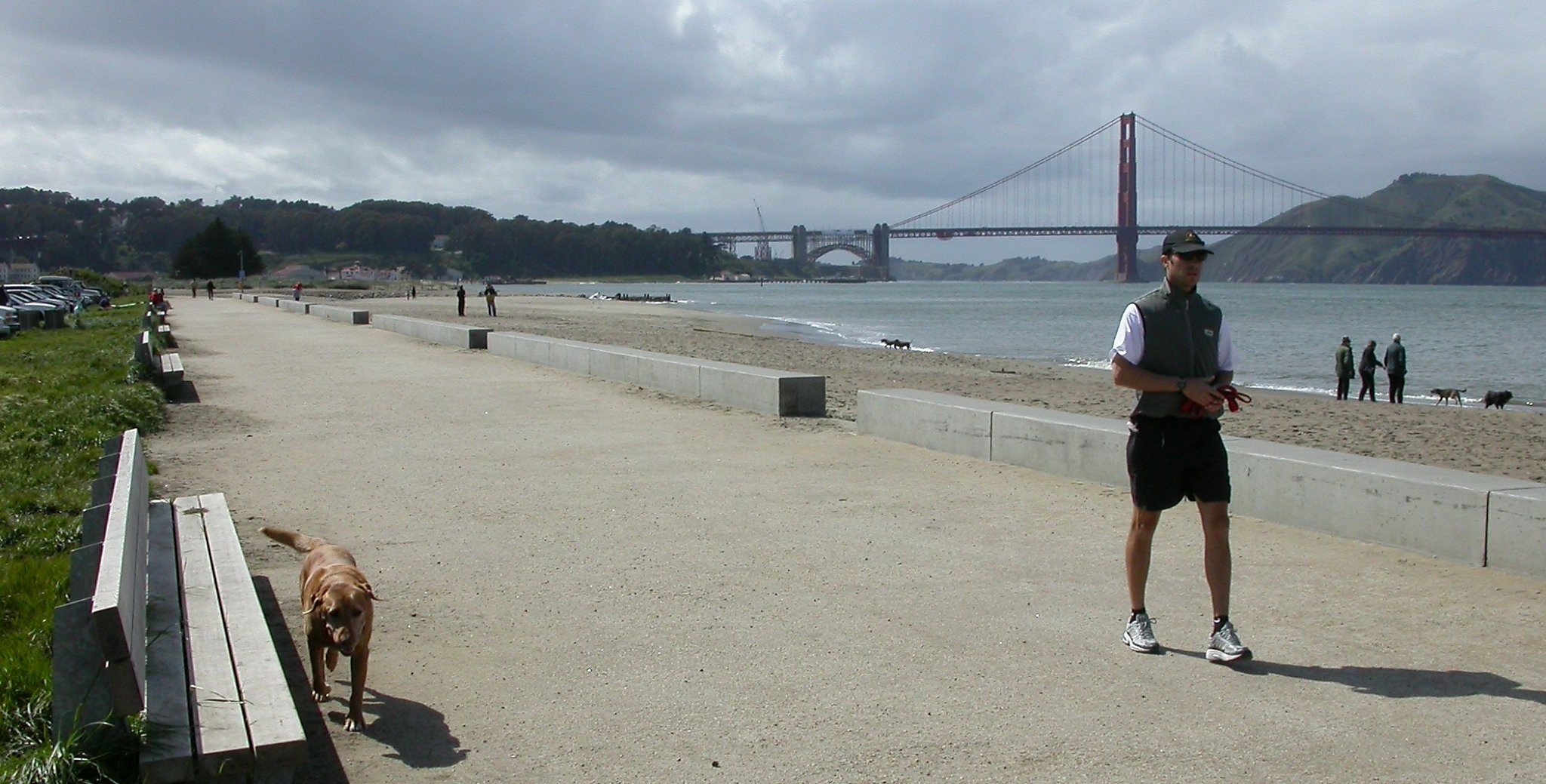 A 74-acre stretch of grass and walkway between Fort Mason and the Presidio, this northernmost walk in San Francisco is an ideal way to check out the bay and the International Orange monster connecting SF to Marin on one side and houses built in the 1920s and 1930s on the other side. Also a great place to bring along your pooch. 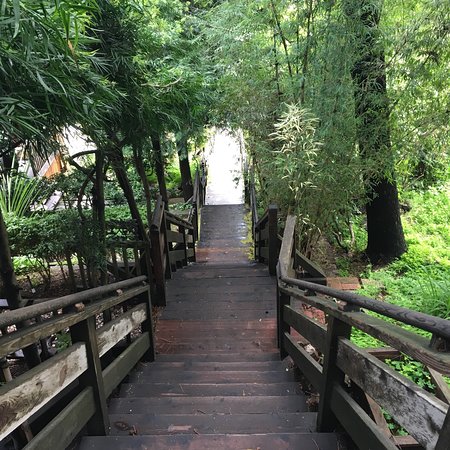 Head to Telegraph Hill, bypass the long lines at Coit Tower, and step up the Filbert Street steps, a series of wooden stairs that take visitors up and down the famed hill. The highlight along the steps is Napier Lane, which is a wooden plank sidewalk lined with pre-1900 cottage-like homes, and a public garden dubbed Grace Marchant Garden. Other reasons why you should work your calf muscles: unobstructed views of the Bay Bridge and Treasure Island, as well as the local feral parrots who will visit regularly. 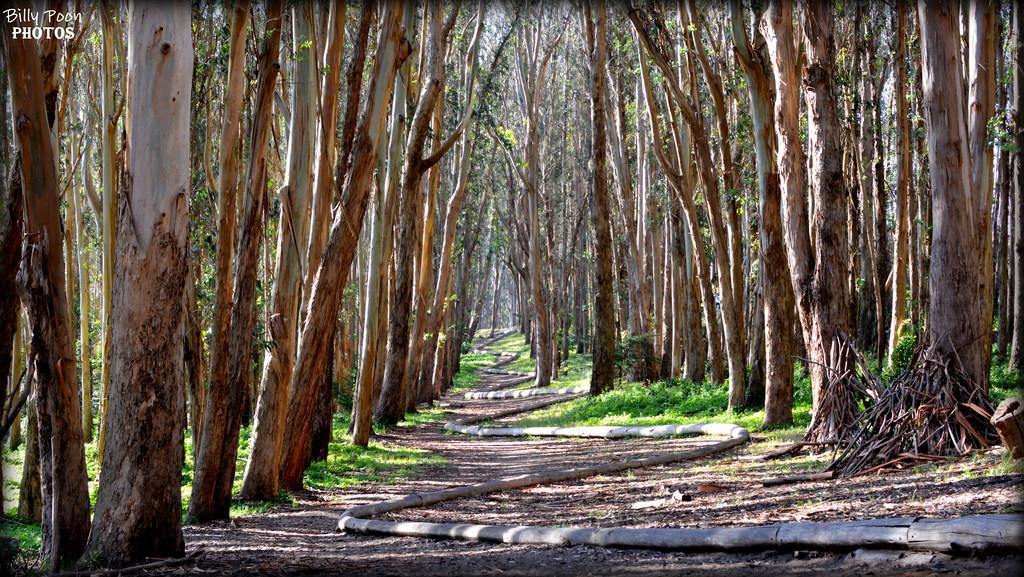 What better place in which to enjoy with a loved one than along a twisty, curvy path with arboreal views. The oldest footpath through the Presidio, the small stretch was established in the 18th century as a shortcut used by Spanish soldiers and missionaries to get from the Main Post to Mission Dolores, located three miles south of the Presidio. Today it’s one of the city’s most Instagrammable spots. These steps, which connect Cow Hollow to Pacific Heights, require hoofing up eight flights of 15 steps to reach the top. But once you reach the apex, eye-popping views of the bay, the multimillion-dollar abodes, and the Palace of Fine Arts await. 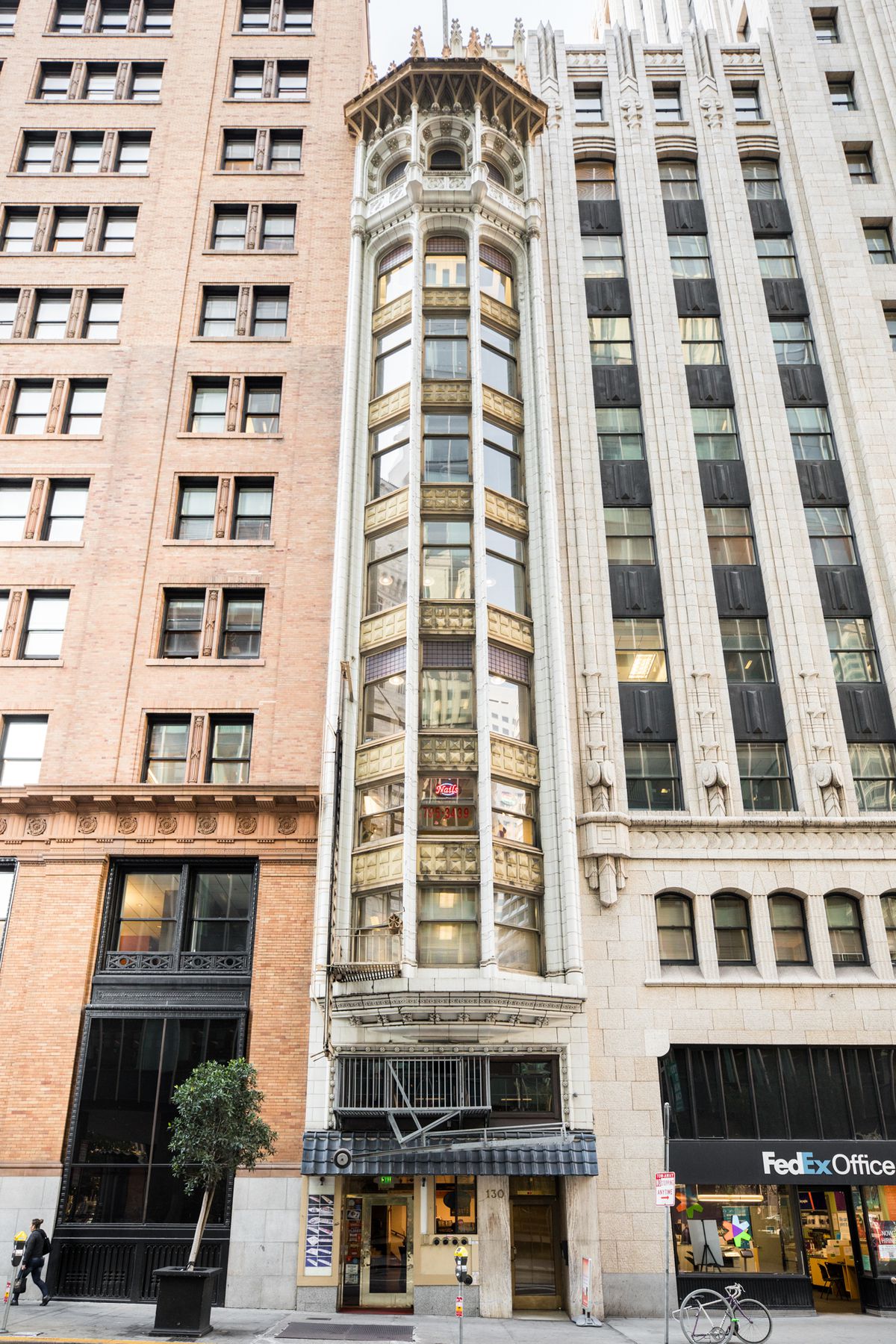 Yes, really. When Saturday and Sunday rolls around, and worker drones escape their cubicle dwellings during workdays, the Financial District deserves a second look. Weekends prove an ideal time to check out this area rich with noted architecture (130 Bush and the Russ Building). It’s also a flat walk, so there’s no need to don your hiking boots.

Let’s not get too caught up in Mother Nature. Sometimes a nice stroll in the city means little to no contact with bodies of water or leafy views. Enter Sacramento Street in Presidio Heights. This well-to-do neighborhood, pancake-flat in some parts, makes an ideal walk for those who want some window shopping with their mild exercise regimen. Don’t forget to peek at the Presidio Branch Public Library, an Italian Renaissance-style structure that was carefully preserved in an extensive 2011 renovation. 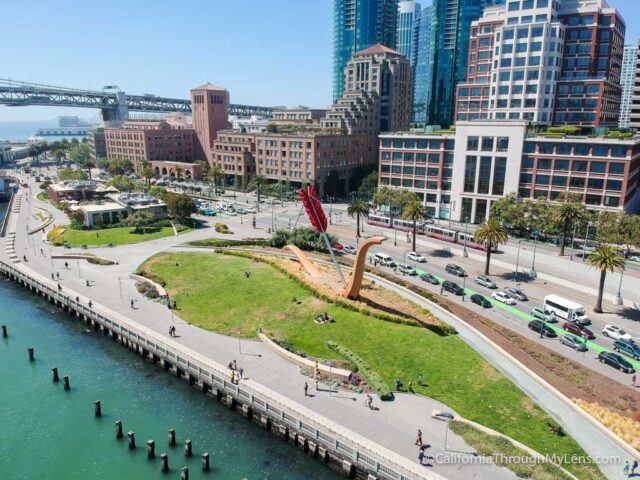 The stroll from Oracle Park to Cupid’s Span is a far less tourist-filled experience compared to walking along the Embarcadero from the Ferry Building to Fisherman’s Wharf. Here you will find South Beach residents walking the ample sidewalk with their dogs and kids. Be sure to stop off at the relatively new Brannan Street Wharf Park to take in the view of the Bay Bridge. 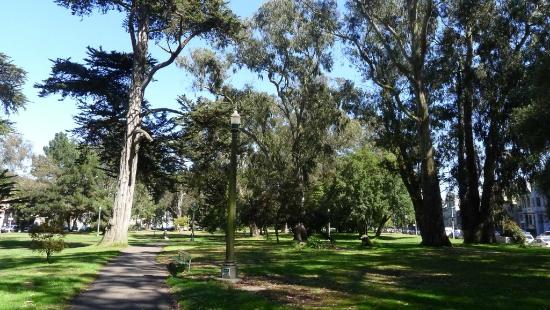 In lieu of trekking across nearby Golden Gate Park proper, take on the Panhandle, a more manageably sized stretch of the park measuring three-quarters of a mile long and one block wide. It features walkways (one for pedestrians and one for cyclists, basketball courts, a public restroom, and a playground in the section between Stanyan Street and Masonic Avenue. Be on the lookout for the William McKinley monument at the foot of the park. 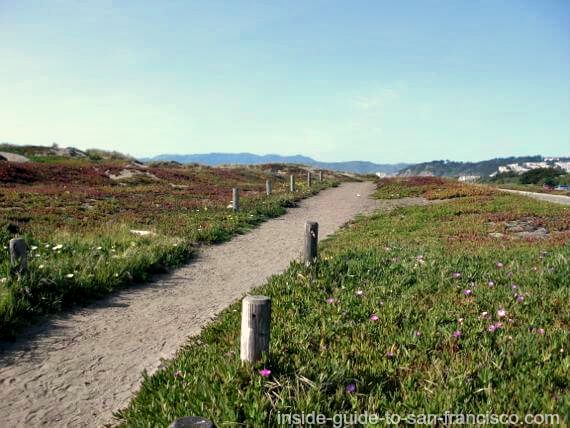 This one is easy: Take the N-Judah or 38-Geary to their final terminus. Get off. And start walking along the beach, either on the sand or on the paved walkway. For an easy walk, Uber to take the 48 to the top of 24th Street and move east. For a more difficult walk, reverse it by starting at Potrero and 24th and head west. 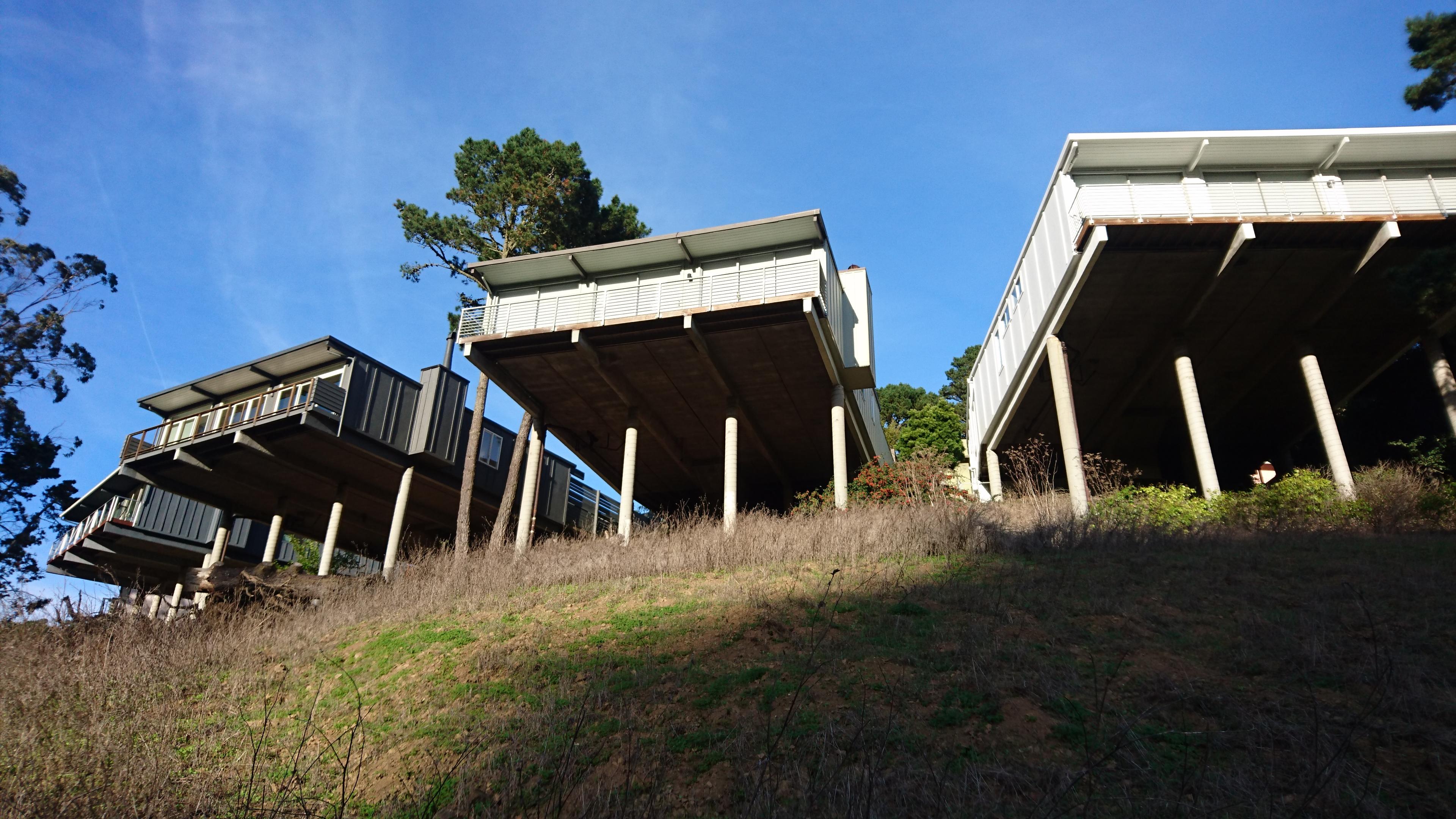 Starting off at a staircase on Turquoise, about eight houses down from Quartz Way, head down to the hiking trail that borders Glen Park Canyon with the homes on Turquoise. You can’t miss the breath-snatching views of the midcentury Eichlers that look like they’re on the verge of a seismic breakdown.

This master-planned residence parks features some of the city’s largest and priciest homes. It’s also a great place to walk around and take in circa-1920s and -1930s architecture. There’s also a series of public stairs. Follow them to see the Beaux-Arts style entrance portals and two epic fountains on St. Francis Boulevard.

Surrounded by three golf courses (including the private Olympic Club, residential areas, and streets, this loop is one of the city’s most underrated walks—at least in the eyes of eastern residents. “The Lake Merced loop is not the most scenic hike in San Francisco, nor it is the most peaceful,” notes Urban Hiker SF. “Despite these negatives, what I like about this hike is that it carries a certain sense of accomplishment with it. It’s a good enough distance that you’re going to be walking for an hour to an hour and a half, and you get to circle an entire natural lake and bird habitat.”

Also of note, this is not a human-made lake. The body of water was christened Laguna de Nuestra Señora de la Merced by Captain Don Bruno de Heceta in 1775, with plans in the early Twentieth Century to turn it into the city’s main reservoir.