A Look Inside of the New Chase Center in Mission Bay

The new Chase Center in Mission Bay is the future home of the Golden State Warriors Stadium and located next to the new “transparent” glass buildings of Uber HQ. It is the future home of Cher and Celine Dion concerts and still under construction, but we can take a peek inside, courtesy of Curbed SF.

The new Chase Center is nearing the end of its construction, and is set to transform the Mission Bay and Dogpatch neighborhoods into a burgeoning area. It’s poised to be the money-maker that San Francisco shakes for tourist and fan dollars alike. It will turn the area into a major pulse point for the city with more traffic and foot congestion. 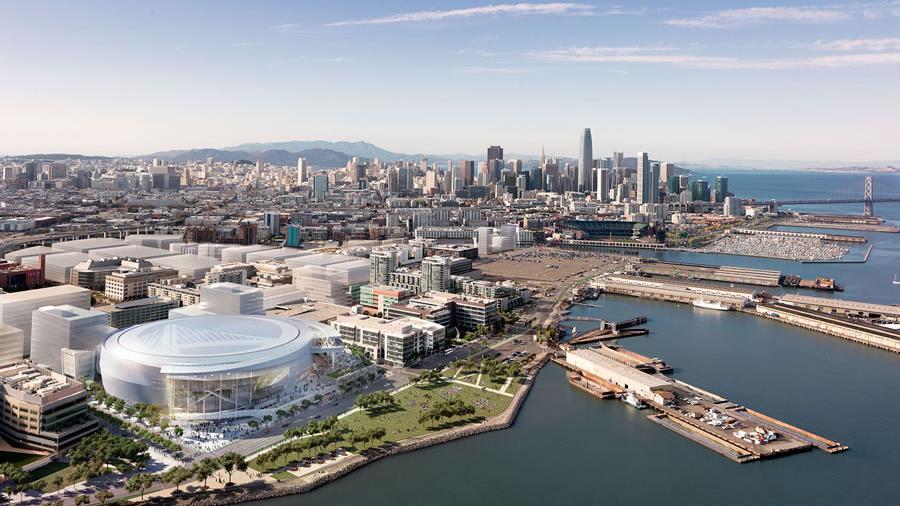 The arena will do more than host the Golden State Warriors, the Bay Area’s championship team. In addition to basketball, the venue will also function as a major concert hall, and is designed to keep the volume and intensity of longtime Oakland home Oracle Arena.

Unlike Oracle Arena, however, which has hosted sold-out performances from the likes of Madonna and Drake, the Chase Center will be able to configure more intimate arrangements for musical acts and theatrical shows, with marquis entertainers such as Elton John, Cher, Janet Jackson, Celine Dion, and Trevor Noah already lined up to grace the floorboards.

Take a look inside the new center for what’s to come. Photos courtesy of Patricia Chang at Curbed SF. 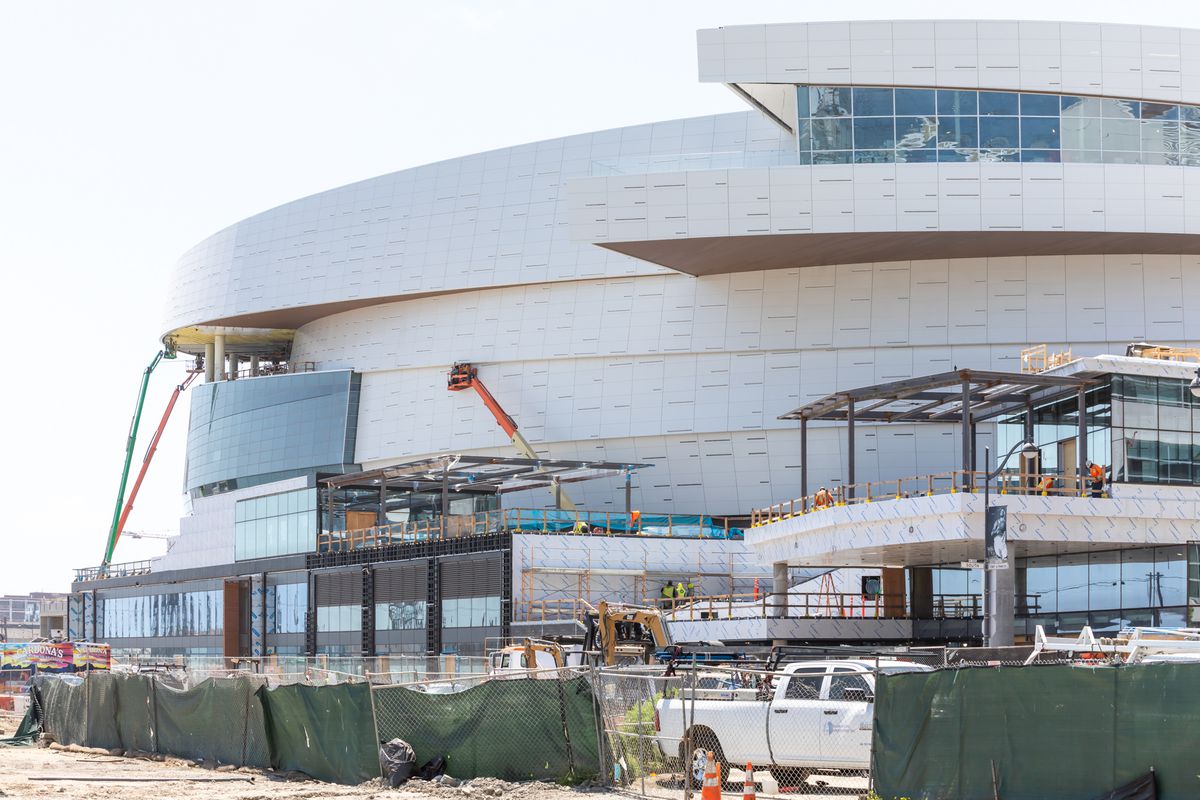 The north side of the arena. The top balcony Bayside Terrace will also be an event space offering views of the skyline, the Bay Bridge, and the East Bay. 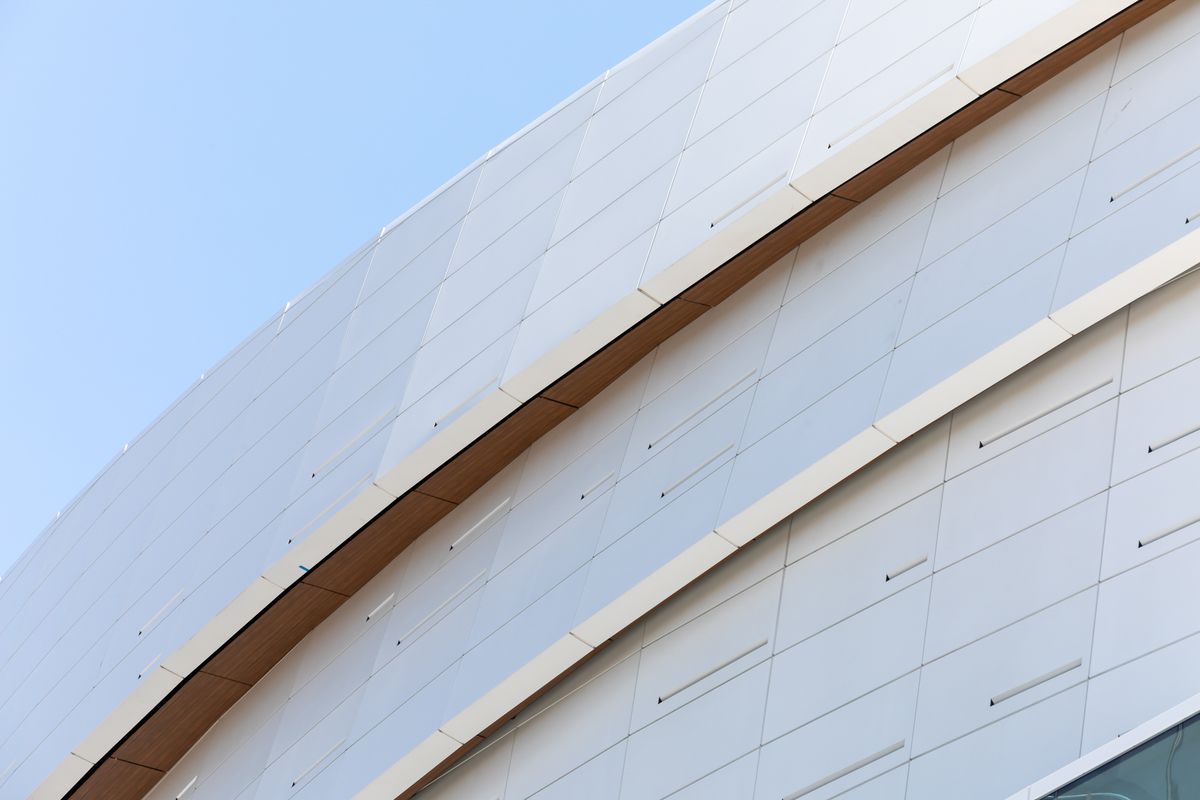 The exterior design of the arena, made up of gleaming white perforated panels, was inspired by the nautical history of the Bay Area and, according to architecture firm MANICA Architecture, “the dynamic and flowing forms of the surrounding water.” 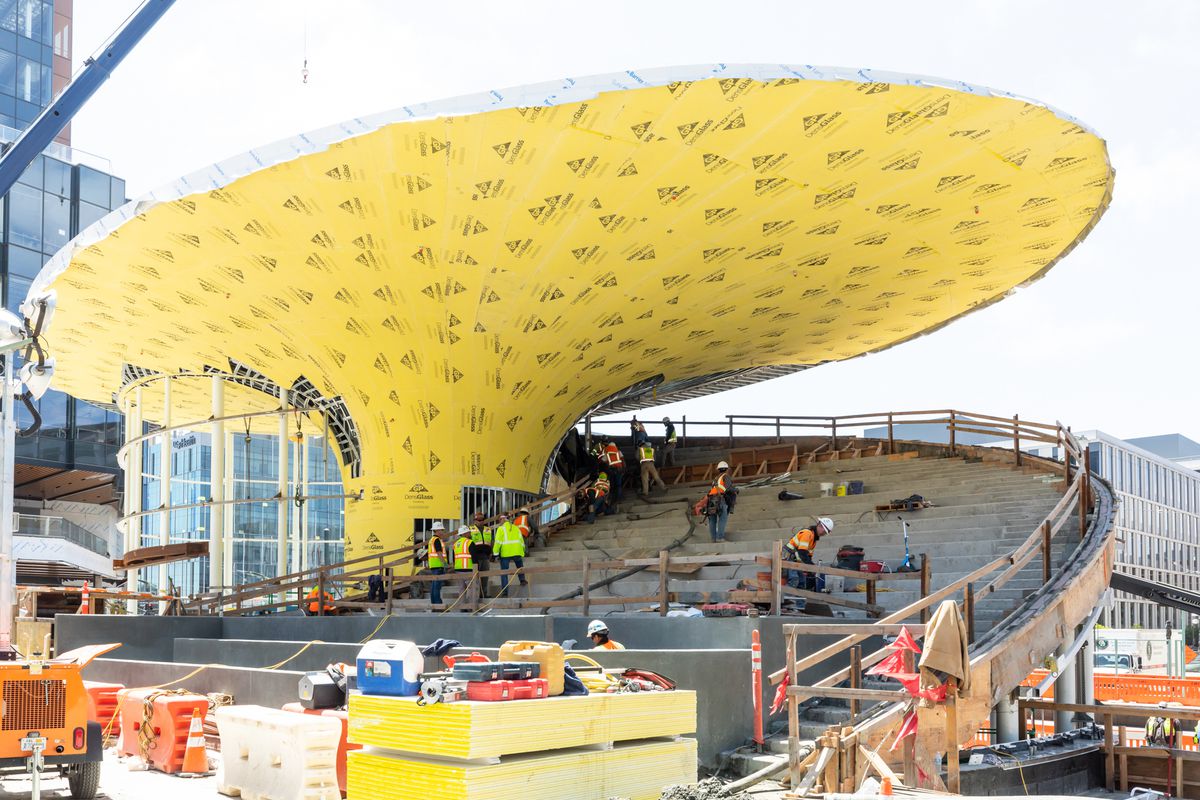 The Gatehouse, a 5,000-square-foot structure along Third Street, will help frame and partially enclose the main plaza, creating an intimate environment for visitors. The building will feature two retail spaces, one at street level on Third Street and one at the main plaza level. 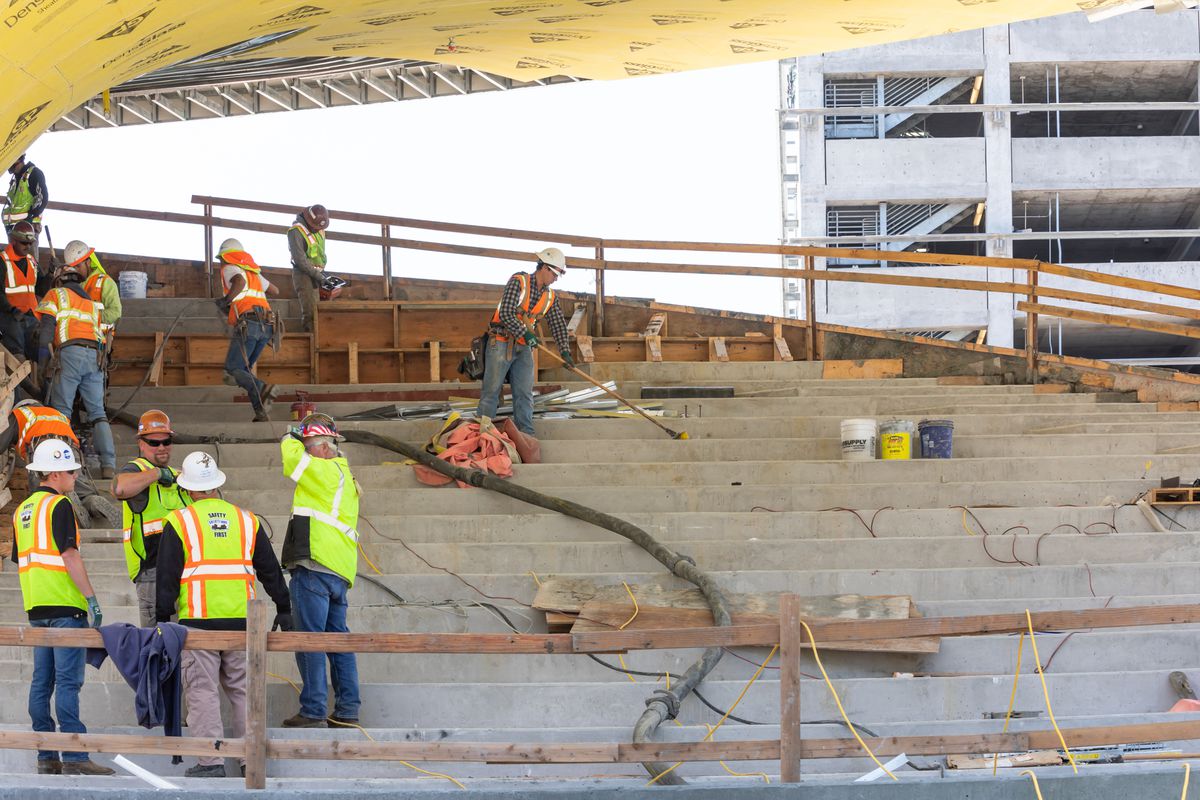 The stadium seating will seat up to 250 guests, who can watch everything from ice skating (during the holiday season) to movie nights inside the plaza. 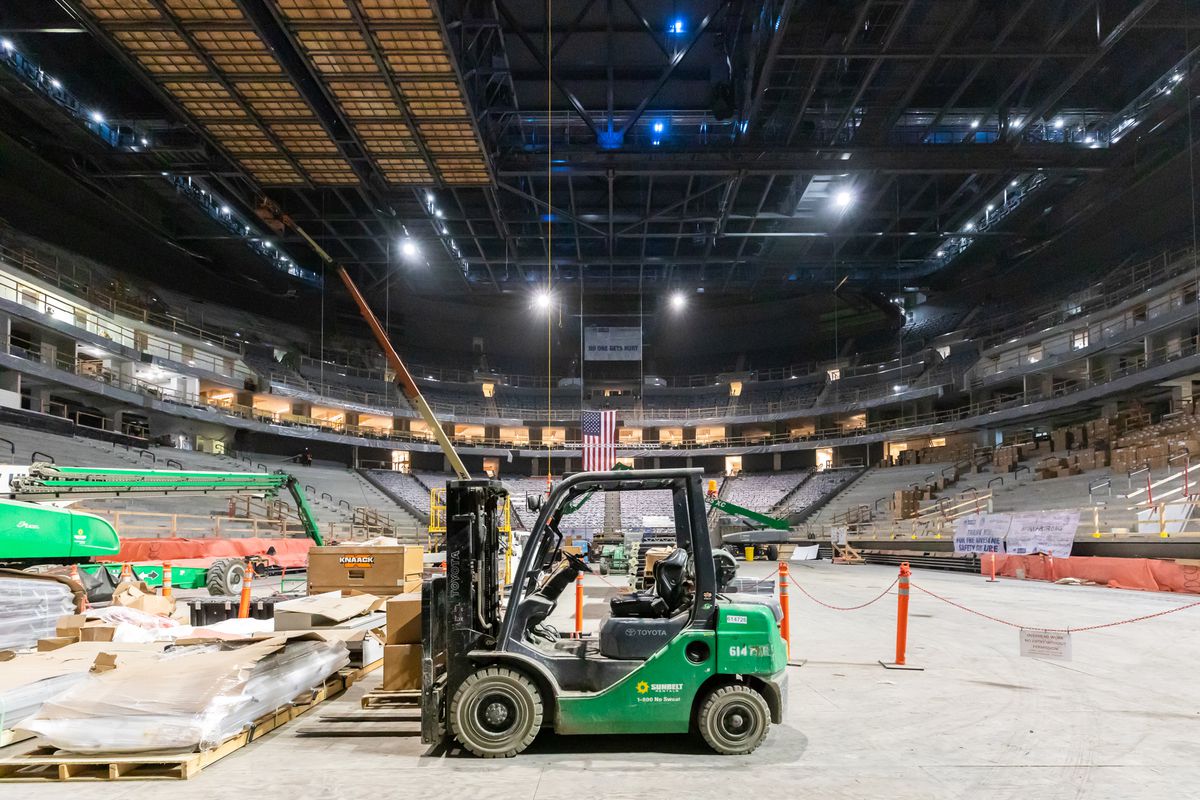 The arena will come with 18,064 seats spread across three levels, with 32 courtside lounges and 44 luxury suites. The noise will be less ear-piercing compared to Oracle Arena—nicknamed “Roarale Arena” due to the acoustics and the noise level of the crowd. 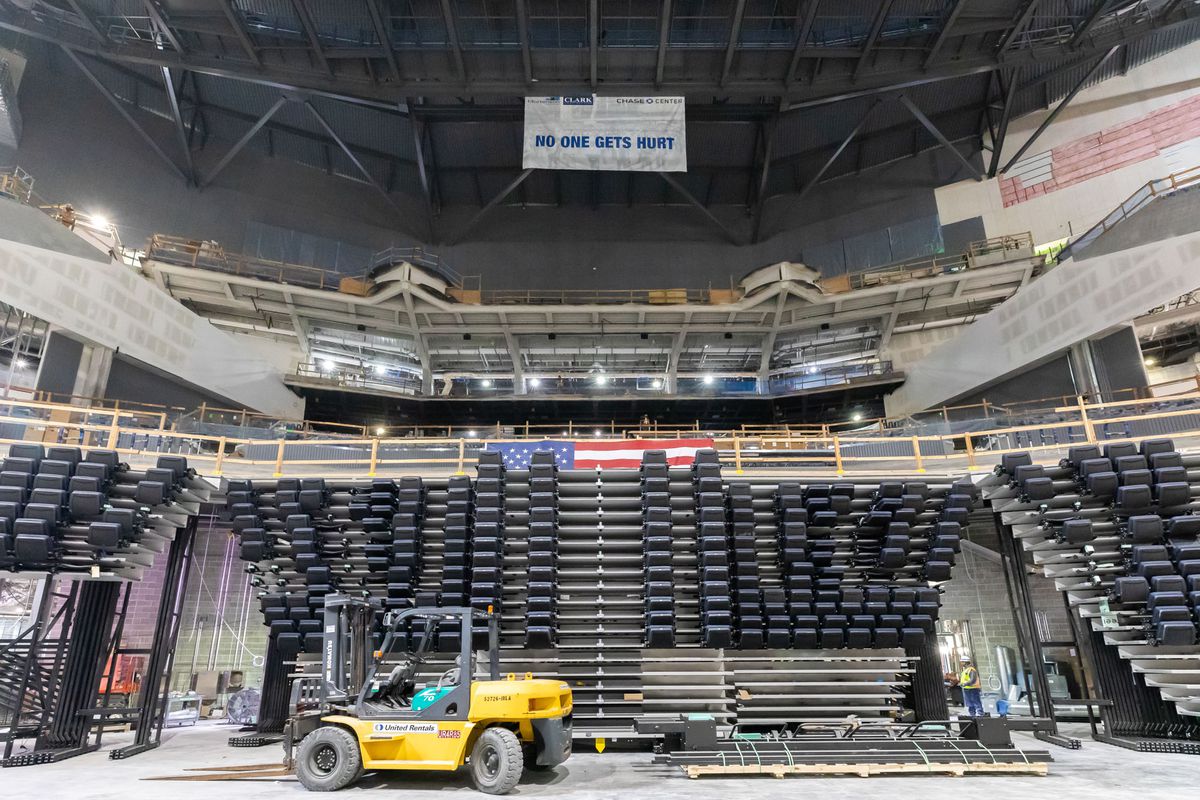 Portions of arena seating will retract and the ceiling will drop for events and concerts that call for an intimate atmosphere. 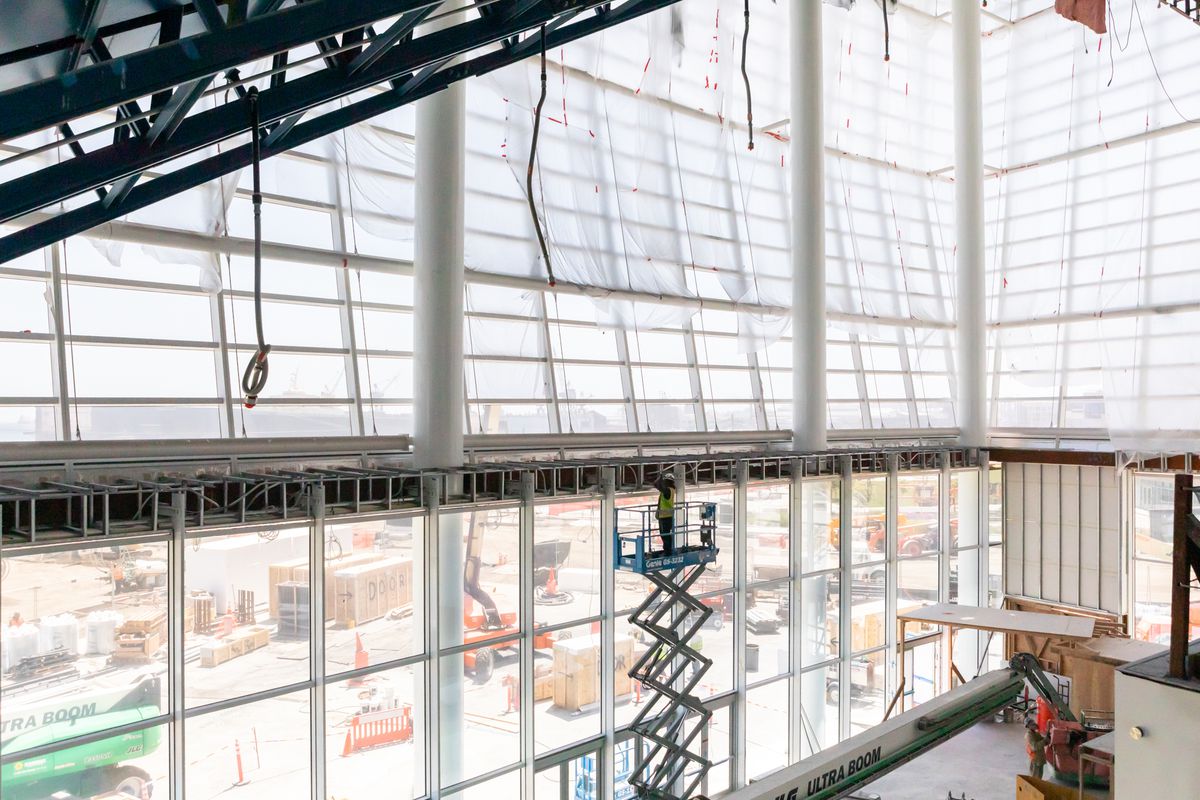 Chase Center will come with two entrances. This is the southeastern entrance, which will be used during basketball games and as the primary entrance during concerts and other entertainment events. 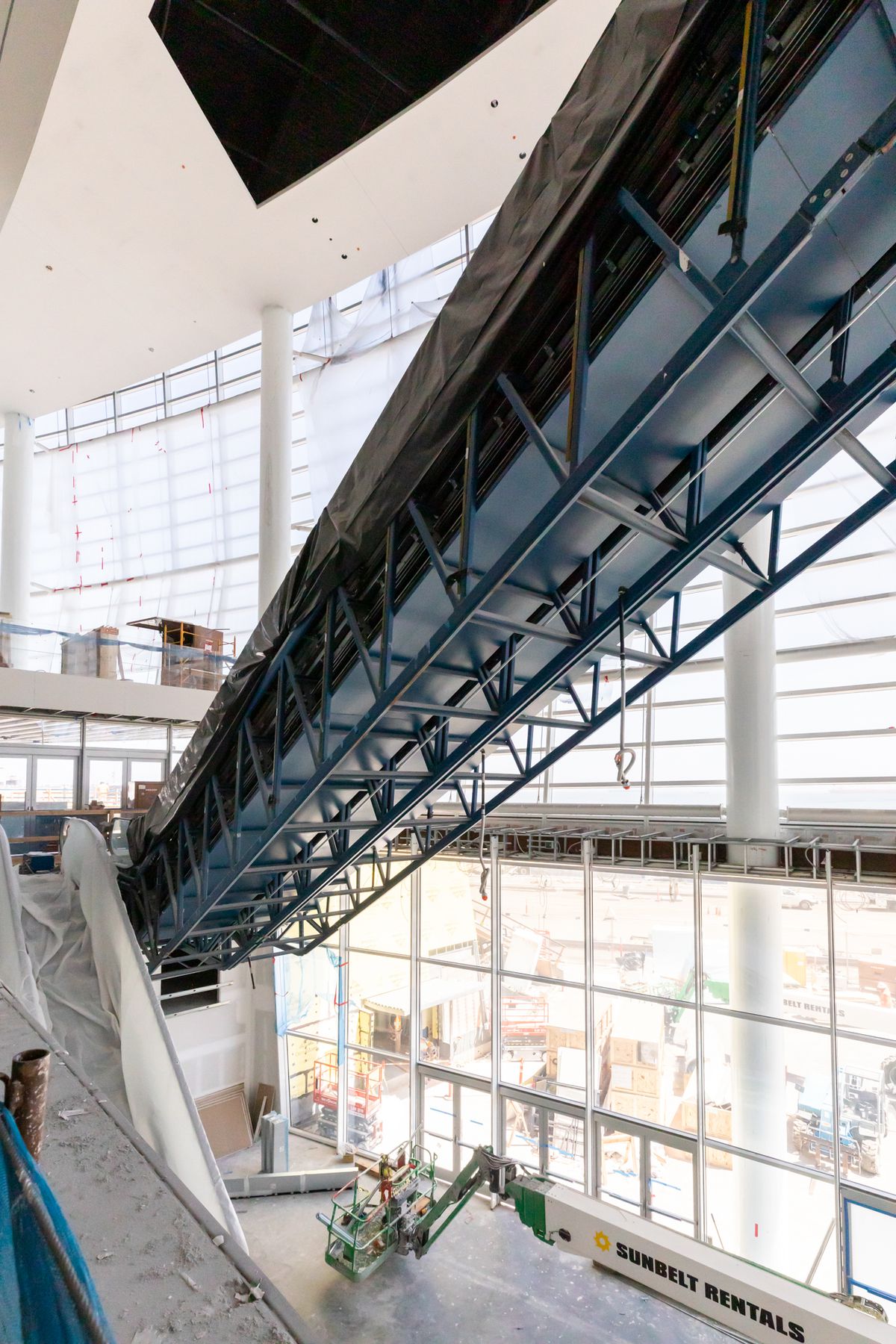 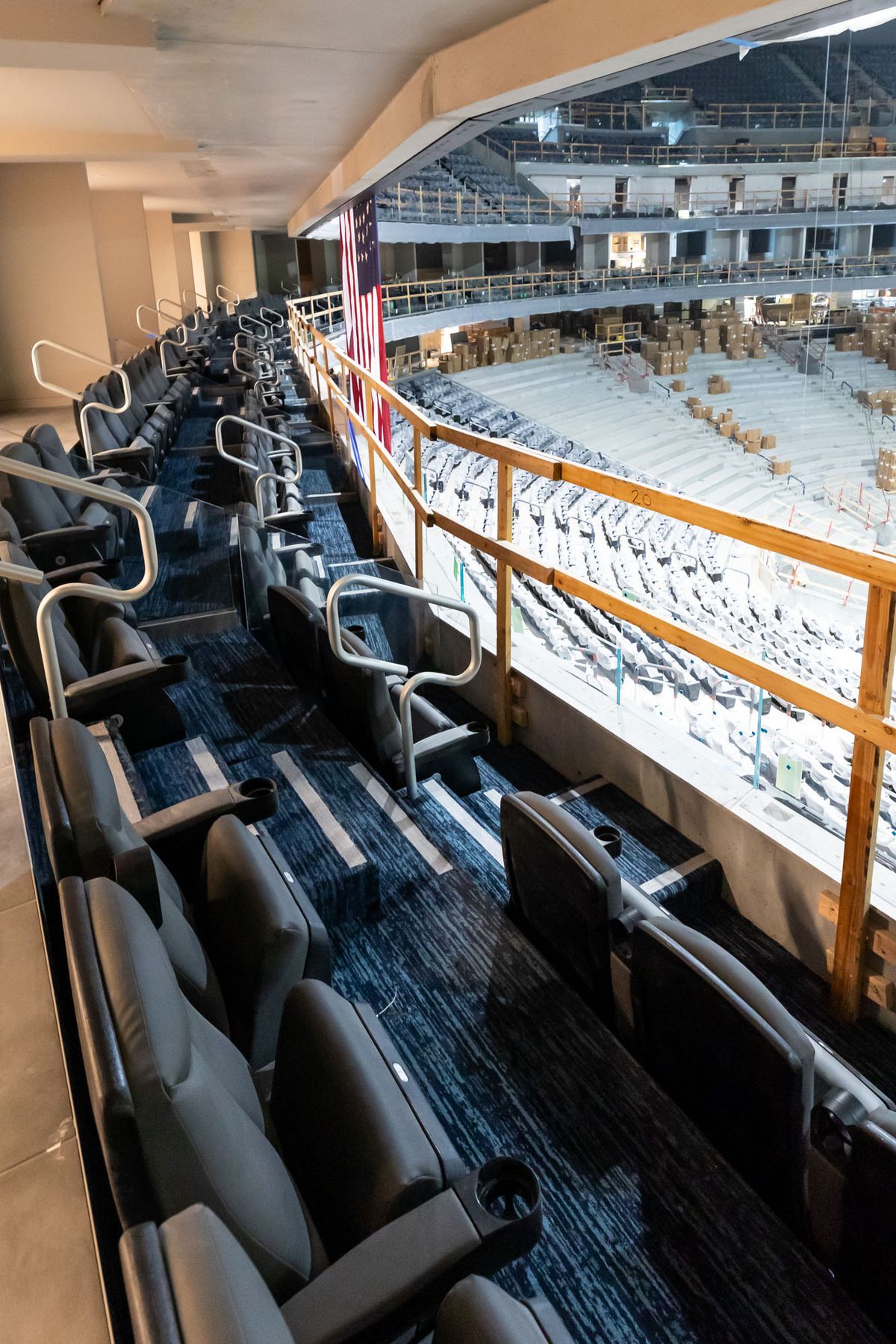 Luxury suites will also come with private seating for guests. 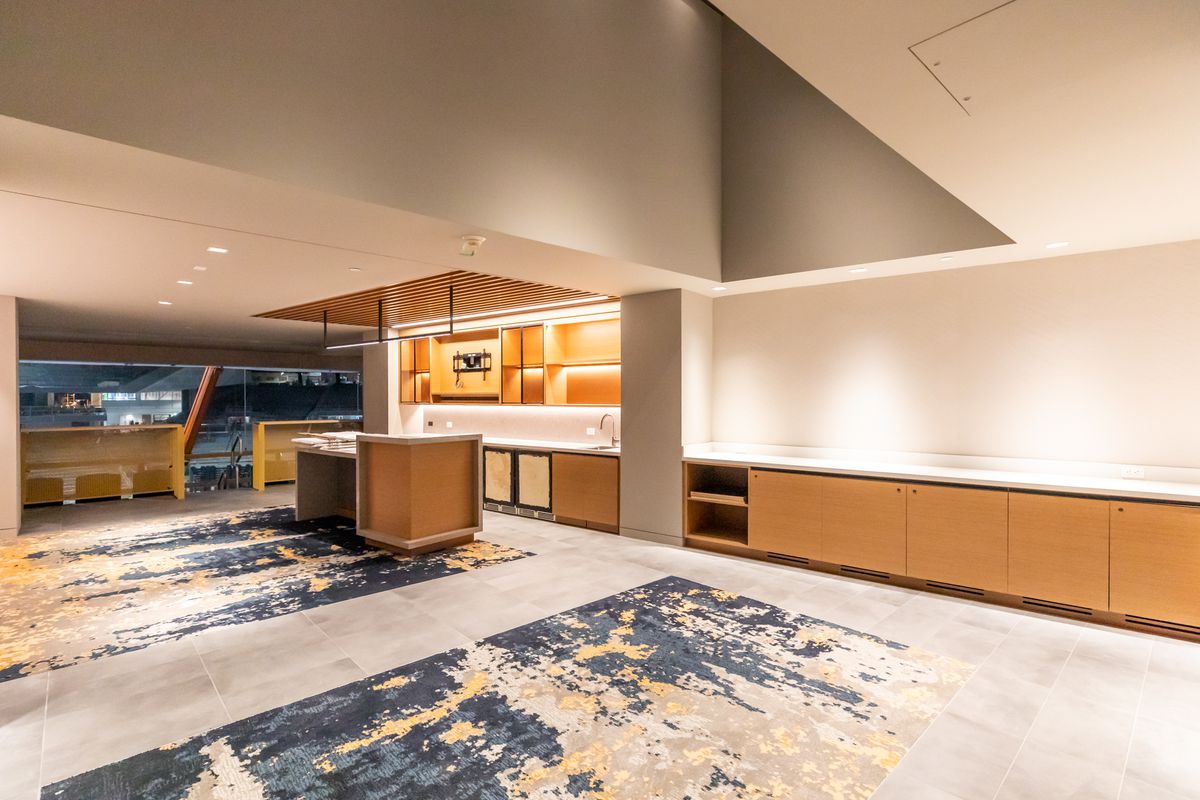 One of 44 luxury suites that encircle the arena, which will come with televisions (in some cases, an entire wall of TV screens), formal dining areas, and catering from Bon Appetit. 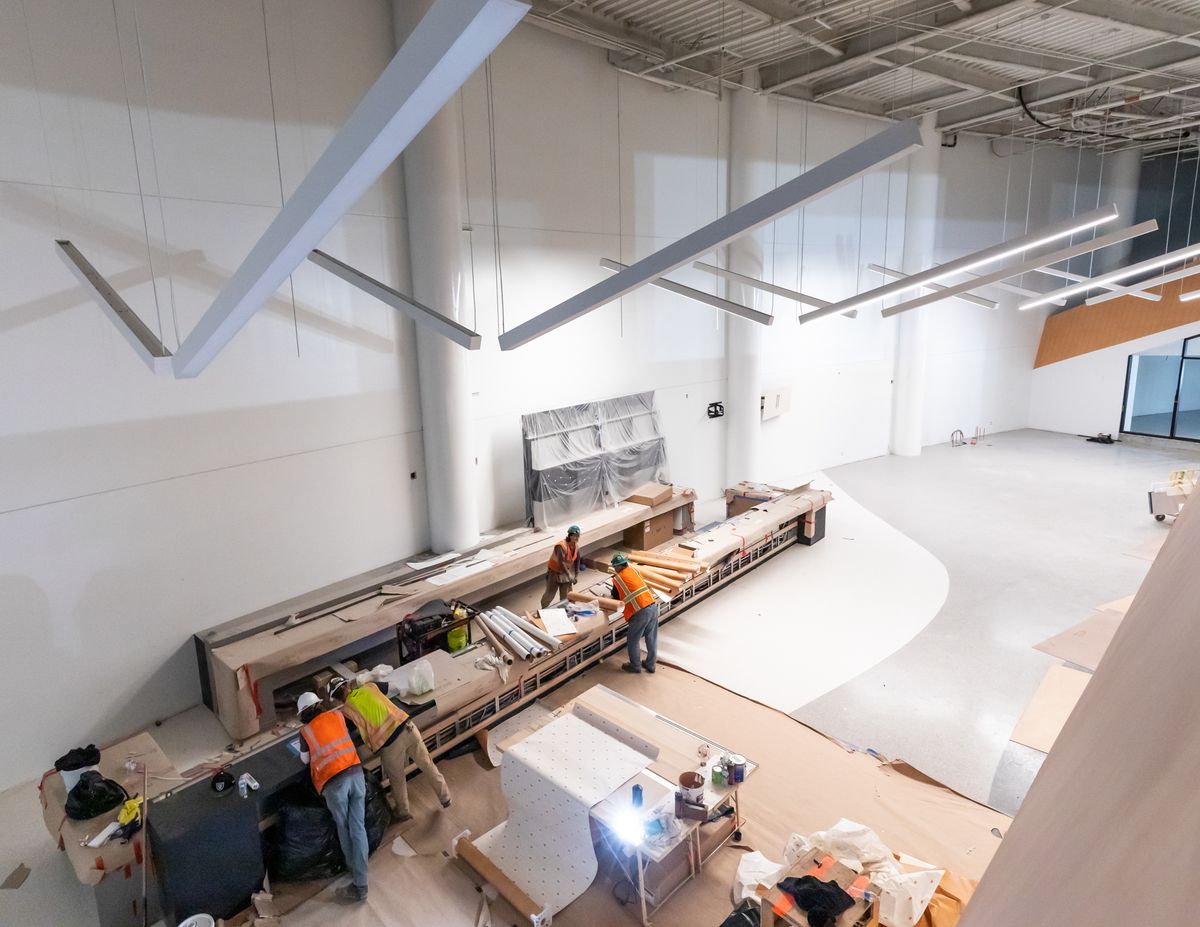 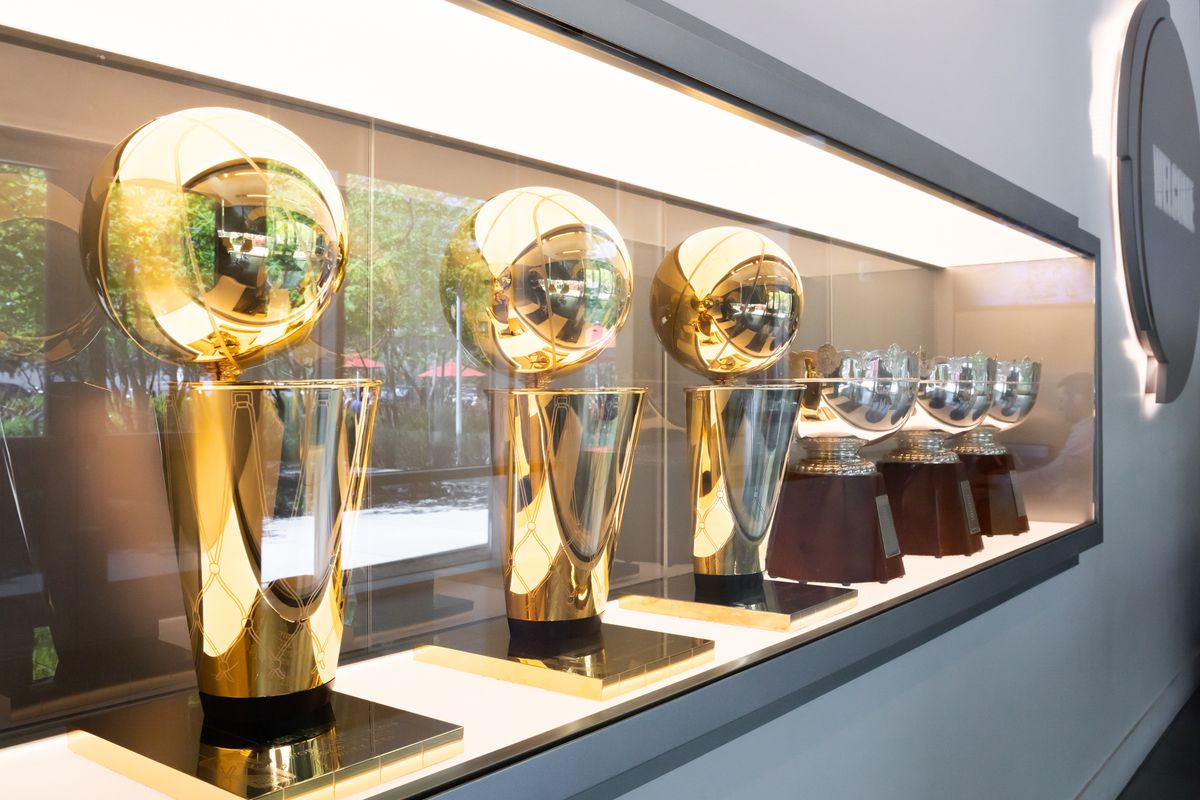 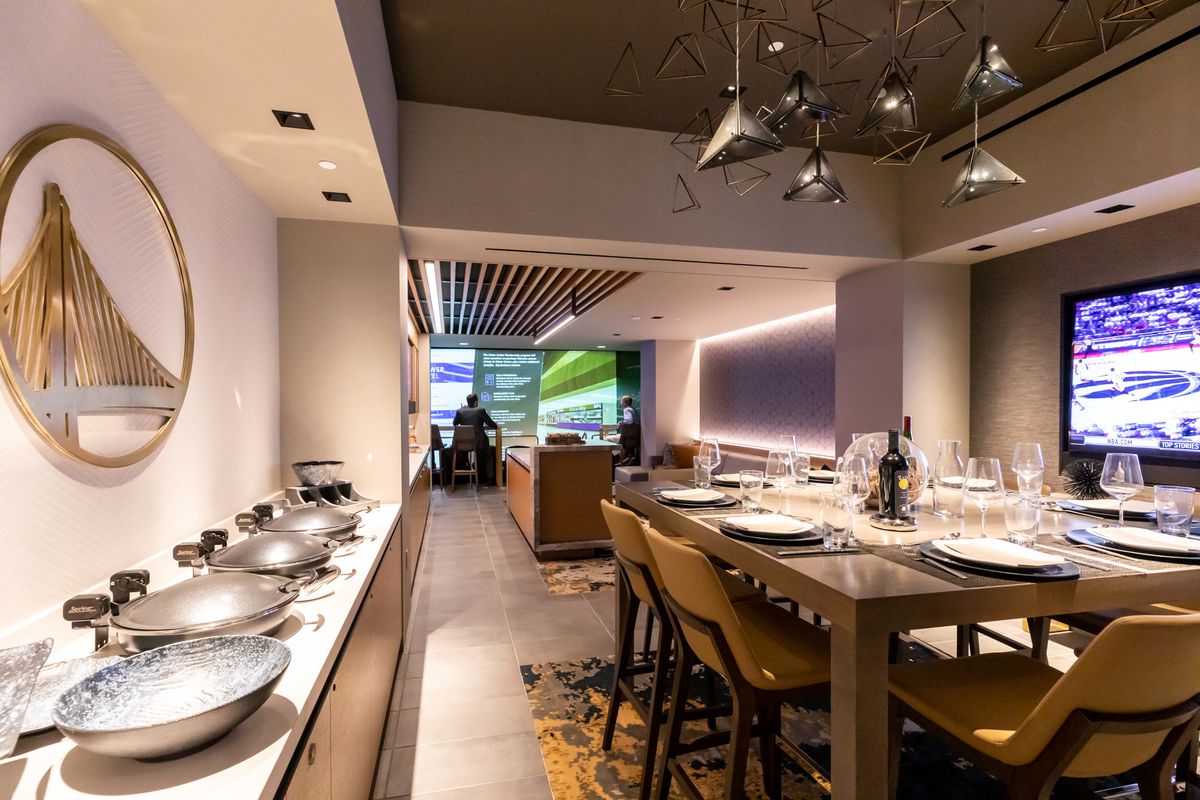 A mockup of a luxury suite. 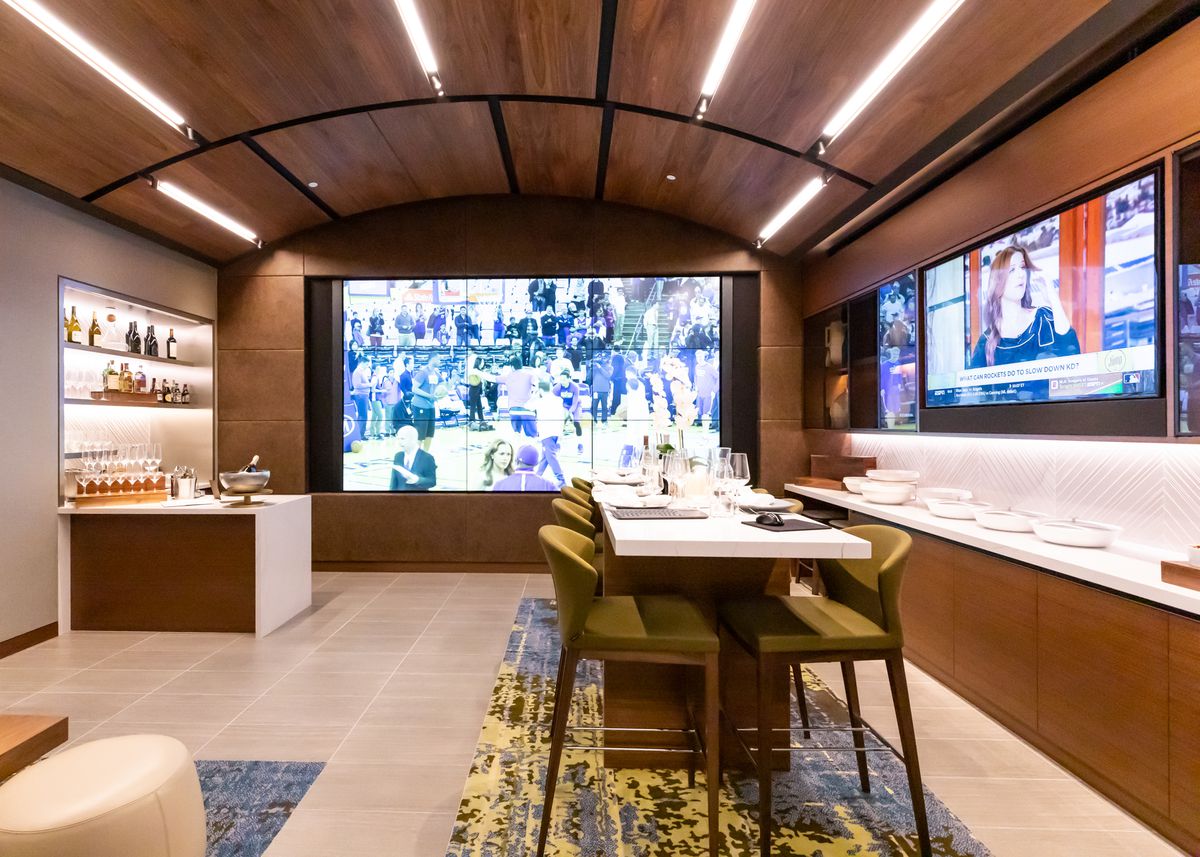 Mockup of a deluxe luxury suite, which comes with its own bar and wall of TVs. Guests will also have access to private seating directly behind courtside seating. 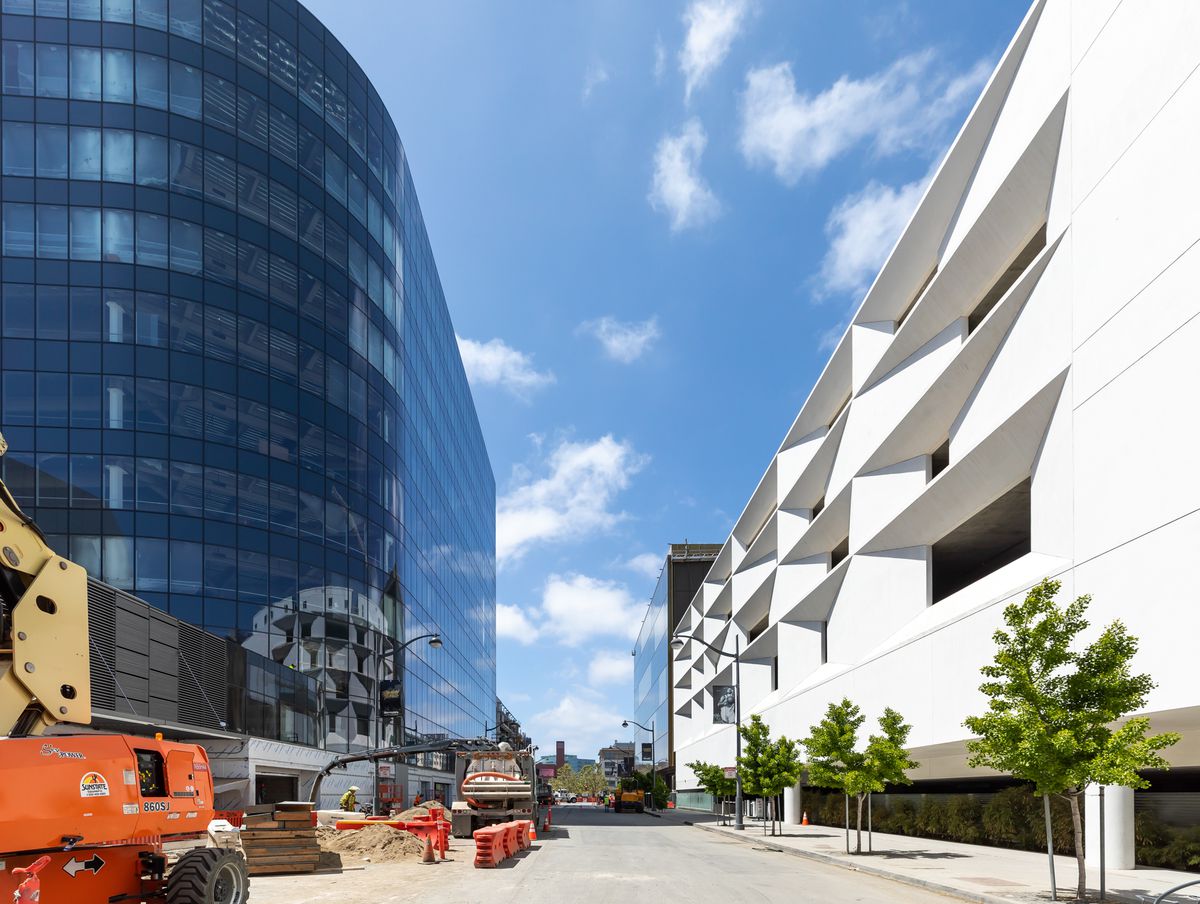 The site will feature two office towers, which Uber will occupy for 20 years, as well as a retail block with 29 restaurants and stores. (Note to architecture geeks: One of SF’s best structures, the WRNS Studio-designed parking garage, pictured here, can be found on South Street.) The Golden State Warriors and Kaiser Permanente recently agreed to rechristen the 11 acres surrounding Chase Center as “Thrive City,” from Third Street to South Street to Terry Francois Boulevard to 16th Street.